Amish Prefab, a lot of DIY — and a surprising vinyl plank floor — combine in a place to call home

Rick Hicks was looking for a fixer upper to transform and call home when he decided it was time to downsize in 2015. A mechanical engineer, Rick’s ambition was to have enough land to build a 3-to-4-car garage, where he could work on cars – his hobby and passion.

But the best properties listed and were sold quickly, and suitable opportunities were difficult to bid in time. Then, an open piece of land in West Chester, OH, caught his attention. The only building on it was a 30-foot by 40-foot metal garage – perfect for working on cars.

“It was like being secluded out in the country but with all the convenience of being in the city,” Rick says. “The hardware store is only a few minutes down the road.”

So the plan quickly changed to building a home, instead of a garage. Rick and his brother, Ron Hicks who is an architect, began researching building options. To fit with the wooded lot, the one they chose was an Amish-made log cabin, built off-site and then installed on a foundation the brothers were to construct themselves.

They found a cabin builder, Salem Structures, in Salem Ohio, who initially was hesitant because of the distance and complexity. But they finally decided to stretch themselves and take on the project.

“We decided to locate the house in the same location where a previous home had burned down many years ago,” Ron explains. “As the design developed, it became obvious that the terrain would allow for a one-car garage to be incorporated under the cabin, along with a workshop in the basement.”

A T-shaped layout was selected to increase the space, and provide a standing-height loft that overlooked the living room. As finishes were finalized, modern cabinets, appliances and fixtures were incorporated. And then there would be a surprising selection — waterproof luxury vinyl plank flooring.

The art of Amish prefab

“The Amish Cabin builder typically does ‘semi-custom’ units, meaning that they work 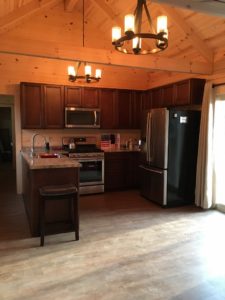 within their standards on overall size, and framing, but wall partition arrangement can be customized by the purchaser,” Ron, vice president at SHP Leading Design, says. “The significant thing we did was to purchase two units and attach them as one in a T-shaped configuration, something Salem says they had never done before.”

“I wanted it open, with as much length and height as possible so that it did not feel cramped, cut off or boxed-in,” Rick says. 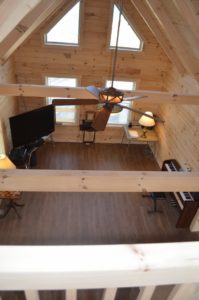 To get a full walking-height loft, they added a shed dormer on the rear side of the front box.  The roof height, however, meant that the roof would have to be erected on site, requiring the carpenters travel with the cabin and complete the framing as soon as the units were placed on the foundation.

“They did a lot of prefabrication of the roofing members, including hinging the gable ends, so that they could be simply tipped into final position almost immediately,” Ron explains.

Once the gable ends were in place, ridge beams were set, and precut rafters were installed and insulated. Roof decks were placed with synthetic felt to make them watertight.   Front gable dormers and the shed dormer were prefabricated in one piece and placed on the roof by crane. Front porch columns, beams and gable ends also were precut and prefabricated, so the porch roof deck could be installed immediately.

“From the day they started work on site, our building was up and watertight in three and a half days,” Ron says. “They returned the following week for completion of the roof, and final punch-list work. Their workmanship was just as we had hoped, and they were a pleasure to see in action.” 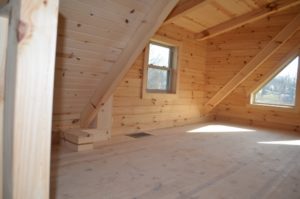 Heading for the finish

But the work was far from over.

The units were prewired, plumbed, with all walls finished, and all doors and windows installed. Ron and Rick did all of the remaining work, including the plumbing, heating and air conditioning, finished lighting, electrical devices, cabinets, flooring, interior and exterior sealing, the drywall ceiling and wall in the garage, crawl space and garage insulation, garage door and basement windows. They also built an additional, detached two-car garage that was sided with solid wood log siding, stained to match the cabin, and roofed with matching metal. 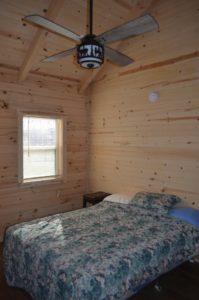 “There was so much interior wood with the log walls and wood ceiling, I wanted a different material, and even considered ceramic tile,” he says.

But ultimately he chose Aqualok Waterproof Plastic Composite in color: Malibu. The color provides a weathered look, a nice transition between the walls, and the dark, highly finished kitchen cabinets. The planks lock together and can float, so they do not have to be nailed or glued down. And because the floor is completely waterproof, there is no concern about plumbing leaks damaging the floor.

“It looks great, is very durable and easy to take care of,” Rick observes during a tour of the property in early February — just a few days before the final occupancy certificate is to be issued. 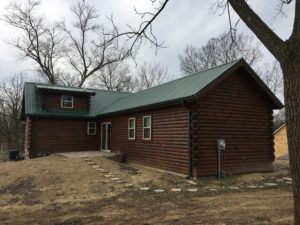 In all, he notes, the planning and work have taken 17 months — not bad for a couple of do-it-yourselfers, squeezing the work in on weekends, evenings, holidays and vacations.

He is almost home. ©